I am a Liverpool-based, Australian-born theatre maker, classical actress, singer-songwriter, performance poet, clown (Fairy Bessie) and podcaster, who has trained and worked in the UK, USA, Russia and Australia.

“Flloyd Kennedy gave us some banjo tunes about insects, beetles and the like as well as some spoken word. It was joyful and playful. She mused about writing a book about nothing – “a post apocalyptic book about me”. That’s unfair. There’s a lot to like about Flloyd.

“Merry Go Round – a lullaby for a stoical baby is a song with which we could do with taking heed. “Live in the moment for the future will astound you” and “The future is already here and it’s either what you hoped for, or it’s not!” She has books of her poetry on Amazon.”

Threshold X – the Last One – a Beautiful Sadness

“You have absolutely blown me away with your interpretation of Mrs A. You’ve not only brought her to life, you’ve given her a heart and a truth that I could only ever have dreamed of. You’ve been an absolute delight” Beth (Producer) and Ben (writer) 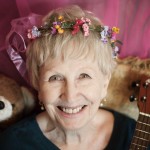 London – “loved the ballsy hiphop”  “infectious!” “enjoyed unpacking of the sonnets” “a wonderful journey” “she is just a great performer”

Siân Rowland, LondonPubTheatres. says: “Flloyd Kennedy twinkles and twirls in peacock blue (with matching nail polish) and takes the audience on an hour-long romp through her character’s life. I probably learned more about some of the Bard’s best known sonnets in that one hour than I did in the whole of my school career. We were schooled in quatrains and rhyming couplets, imagery and structure. Kennedy clearly adores his work. Just as we’re drawn into Shakespeare’s most sublime verse, out comes the ukulele and we’re transported from an outback dunny to the local dance via some musings on life, love, parenting and grandkids.” –  You can read the full review here

“Ukulele at the ready, June Bloom calls forth beautifully delivered Shakespearean sonnets as she transports her suitcase and her niggling mummy issues across the stages of life. Rap on, Dame June! “ Doug Honorof
Voice Coach, NYC

““Flloyd Kennedy’s Yes, Because… is mesmerising, especially as it’s laced with Shakespeare Sonnets! The vocal pitch range she uses in the course of the show sets a brilliant example for young students who tend to stay within a very small compass.” Dr. Joan Melton, Musical Theatre Faculty, Manhattan School of Music, NYC (author of One Voice, Singing in Musical Theatre, and Dancing with Voice)

For an evening of laughter, whimsy and wit don’t miss “Yes, Because…”, Flloyd Kennedy’s solo show. You’ll spend an hour with a woman who will charm and touch you, make you giggle and guffaw, and do it while offering a refreshing, gently eccentric exploration of some Shakespeare sonnets. She sings and plays the ukulele, ponders life and family and British Pantomime – and every moment is delightfully, deliciously entertaining. I loved it!”
Paula Hoza – New York

“I was captivated… June’s storytelling and songs had me both laughing and crying in equal measure” Kate Stewart, Threshold Festival, Liverpool.

“Yes, Because is a not-to-be-missed poetic, charming and unique piece of theatre. Flloyd Kennedy has a wholly engaging presence and the humility and honestly of her clown-like creation June Bloom is a delight!  Heart-warming and moving in equal measure, this piece is a real gem!” Tess Zoers, Theatre Manager and Director

“Never having seen Flloyd Kennedy perform before, I didn’t know what to expect, but I was not disappointed.  She was amazing and I laughed so much, as she is a master of comedy.  She also has a good singing voice accompanied by her ukulele and everyone could relate to her songs.  Flloyd has a unique talent in getting the audience to participate on her journey and it was a delight from start to finish.” (Clifftown Theatre, Southend-on-Sea. 9th March 2016)

A genuinely entertaining piece, raw and inextricably funny!  Rating: 4 stars out of 5

“Yes, Because… is witty, quirky and intelligent. A genuinely entertaining piece, raw and inextricably funny! Flloyd Kennedy (Romeo and Juliet THAT Production Company, Mary Stuart QLD Shakespeare Ensemble) takes us through her journey of self-realisation in this one woman show. Integrating Shakespeare’s sonnets, Flloyd (Dame June Bloom) guides us through a montage of words with her clever dissection of the stanzas. Flloyd cleverly weaves the personal conjunctions to her passage through life with the hidden meanings and differing interpretations of the sonnets. This is done in theatrical and cabaret style, captivating the audience with her imaginative and colourful world. Flloyd takes you from an untimely beginning whereby she enters as if there is no audience present, exhausted after a huge world tour – drifting in and out of self-talk until she discovers our presence. Then the real fun begins!  She connected to the audience through storytelling, utilising her ukulele skills, costume changes and singing to weave the tale. From quoting a 12th Century French Mystic to turning the whole place into an old music hall atmosphere with sing-a-longs with the audience, there was no stopping this whirlwind performance and Kennedy’s 50 years’ experience as an actor/performer shows. Clowning around, switching accents and performing eclectic parodies delighted the audience who responded with bellows of laughter and cheer. The whole play explains her mental emotional journey. From a questioning child to a rebellious, smart teenager through to maturity, as a woman who reconciles the relationship with herself and her mother. A very touching resolve to the work. Accepting yourself and the flow of life as they are, this personal insight pulls life apart, laughs at it, the success and the downfalls, and the pure joy of being. All through the eyes of a talented woman, entertainer and teacher. Staging this work in The New Globe Theatre provided an intimate, informal setting with a feel not unlike the relaxed well-loved venues that can be found in underground Manhattan New York. Where real actors gather and perform. The small downstairs venue was strewn with retro couches and chairs casually offering comfort as well as a soft lit bar. A rather dingy place, yet packed with atmosphere.” Sally Peters. Artshub

“It’s seriously funny! Flloyd has a masterful connection to herself and her character and immediately puts her audience at their ease and walks them down a journey of pain and hilarity.”  – Peter Rassmussen

s Kennedy and Mr Croome are very impressive: credible, vulnerable, heart-breakingly affecting – I swear you could hear pins drop. Can they speak the verse? You bet they can. Their delivery is clear, effortless, meaning-filled and … beautiful.”  The Green Room.

“Flloyd Kennedy brings softness, playfulness and mirth to the character of Juliet.” AussieTheatre