Flloyd Kennedy, Australian-born actress, director, singer-songwriter, performance poet and voice/speech/accent coach, took part in the British folk revival in the late 60s, performed street theatre, cabaret and fringe theatre in Scotland throughout the 1980s and 90s, returned to Australia where she undertook research into the performing voice (specifically Shakespeare) for her doctorate.  She has performed, directed, and taught voice and acting skills at colleges and universities in the UK, US and Australia. Now resident in Liverpool, UK, (outwith Covid restrictions) Flloyd performs her songs and poems at open mics in and around Liverpool, tours her one-person verse plays with music around the world and provides coaching for student and professional actors, private individuals and community and corporate groups through her private studio Being in Voice. She is artistic director of Thunder’s Mouth Theatre (theatre of poetry, passion and philosophy),  a Certified Teacher of Knight-Thompson Speechworks, and is an Associate Artist with ISAAC (International School for Acting And Creativity),

FLLOYD KENNEDY has trained and worked in Australia, UK, USA, Nigeria, New Zealand and Russia. As well as performing in cabaret and satirical revues, she toured folk clubs in England and Scotland, and helped to run the Singers’ Club and the Croydon Come All Ye in London at the height of the folk revival, and the Ceilidh Grill in Tiree, Scotland (she was also the cook).

While based in Scotland, she raised two sons with her husband, Scots folk singer Donneil Kennedy, ran drama workshops for the Port Glasgow Association of Tenants’ Groups, performed street theatre, cabaret and fringe theatre, was lead vocalist with The Black Diamonds Havana Band (trad jazz) and Chorde en Bleu (modern jazz). After three years as deputy wardrobe mistress for the King’s Theatre, Glasgow, Flloyd returned to her acting career, touring Scotland with Annexe Theatre, Shared Boat, Cahoots and several one-woman plays with the support of the Scottish Arts Council and various local councils. She helped establish Performance Exchange, coordinating workshops and inter-disciplinary skills training for theatre practitioners in Scotland, and was founding Artistic Director of Golden Age Theatre (Glasgow), directing and performing in classic and contemporary plays, touring to festivals, theatres, schools and community halls (with workshops) around Scotland. Flloyd was invited to join the collaborative ensemble VoiceTheatre NY for “The Homecoming Project”, during their residency at the Columbia (Maryland, USA) Festival 1992, before visiting Russia to train further with the Maly Drama Theatre of St Petersburg. She established the Voice Studies elements of the Acting Courses at Langside College, and Coatbridge College, and taught Verse Speaking at the RSAMD.

On returning to Australia in 1997, Flloyd formed Off The Planet, which performed mask and physical street theatre in national parks, banqueting halls and on street corners. She directed opera and theatre productions (professional, student and youth theatre), including “Madame Butterfly” for the 4MBS Festival of Classics, and “Brave New World Order” for Dianne Gough Productions.  Her musical play “Blame it on Your Mother” was first performed in Scotland by The Wicked Ladies, then by The Girls at the Empire Church Theatre, Toowoomba. Her play, “The Fall of June Bloom (or What You Will)”, received creative development at the Magdalena Brisbane Easter Gathering 2008, and at the ADSA conference in Dunedin, NZ in July 2008, at Performing the World in New York in October 2008, and VASTA conference in New York in 2009. In 2010 it received its world premiere at the Geoffrey Rush Drama Studio in Brisbane, Qld, and was subsequently presented in Phoenix, Arizona as part of the Phoenix Fringe Festival 2011.  In 2012 Flloyd performed the role of the Fish in Across the Pond (Seattle)’s production “Man Catches Fish” at the Nanaimo Fringe Festival (Canada). In “Yes! Because…”, Dame June Bloom returns from a world lecture tour to reminisce and cogitate upon life and mothers with the help of Shakespeare’s sonnets and a ukulele. “Yes! Because…” has been performed in Brisbane, Southend, Liverpool, New York (United Solo Performance Festival) at the Bread & Roses Theatre, South London, Liverpool Threshold Festival 2017, Liverpool Fringe Festival 2018, Westruther Village Hall in the Scottish Borders and Columcille Centre in Edinburgh, 2019.

Other performances include Juliet, in Full Circle Theatre’s “A Tender Thing”, Hannah Kennedy in “Mary Stuart” with Queensland Shakespeare Ensemble and the Nurse in “Romeo + Juliet” with THAT Production Co, and – for the Out of the Wings Festival the title role in “The Real Mother of Marilyn Monroe” (2017) and Eva Lo Brac in “Reality – The Final” (2018).

Presently based in Liverpool, she provides online voice, acting and public speaking training for individuals, and professional, community and corporate organisations through her private studio Being in Voice and is artistic director of Thunder’s Mouth Theatre, presenting theatre of poetry, passion and philosophy. She also regularly performs at local Open Mic events for both music and spoken word.

In 2020 Flloyd published two collections of her writing Sunsets & Kites: scatterings of light and dark in poems, songs and essays and Home is Where I Hang My Pot: poetry fierce and gentle from somewhere over the hill.

Oh, and there’s an app – Being in Voice – for warming up your voice for performance, public presentation and everyday vocal maintenance in the iTunes App Store. for iPhone and iPad.

Am I Old Yet? the podcast

Wow! I thought it was a unique podcast just from the premise, but four episodes into the series, I am finding it a rather surprisingly… moving experience! With a balanced mix of move-you-to-tears drama and comic relief, Flloyd crafts a relatable tale that can touch… ‘You’, no matter where you come from, what you do and, most importantly, how old you are! Episode #1 (which is the second one from the bottom on Spotify, at least) is my favourite so far! I subscribed, hit the bell icon and am yearning for more! Keep ’em a-comin’!

"Flloyd Kennedy gave us some banjo tunes about insects, beetles and the like as well as some spoken word. It was joyful and playful. She mused about writing a book about nothing – “a post apocalyptic book about me”. That’s unfair. There’s a lot to like about Flloyd. "Merry Go Round – a lullaby for a stoical baby is a song with which we could do with taking heed. “Live in the moment for the future will astound you” and “The future is already here and it’s either what you hoped for, or it’s not!” She has books of her poetry on Amazon." 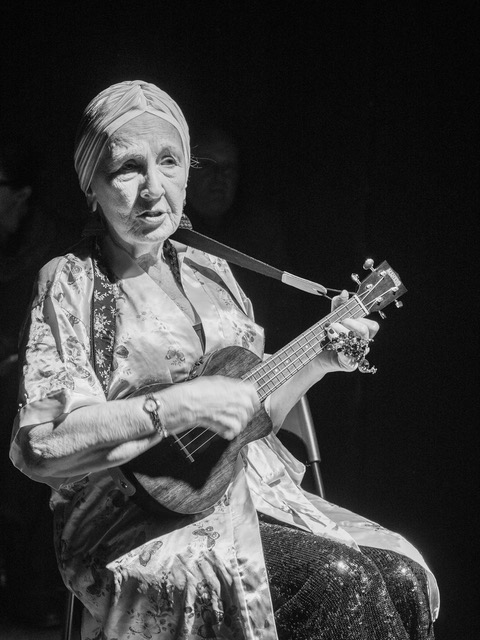